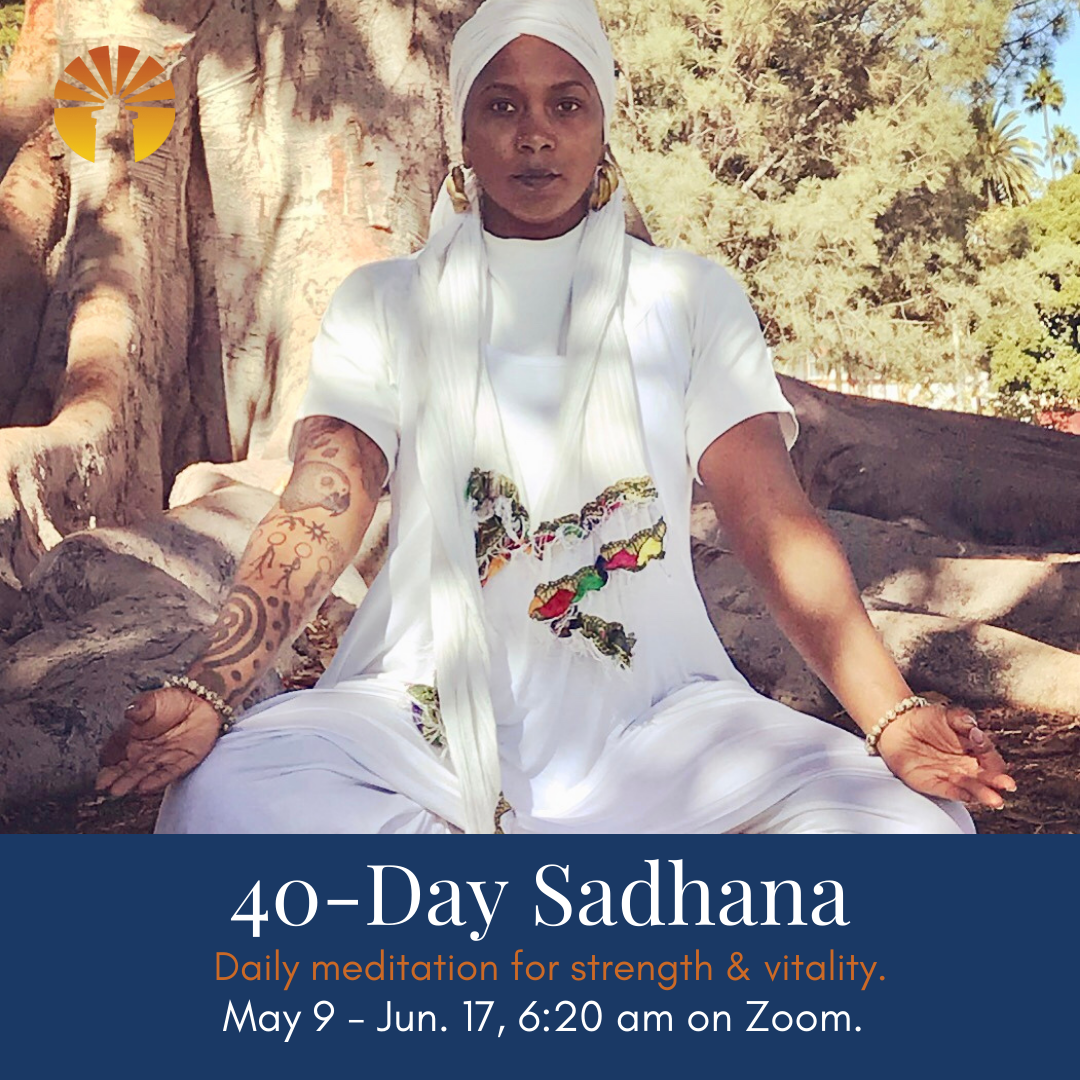 Sat Nam Sadhana "Junkies" its been way too long, I miss our time together very much! Being back at work and holding space is so challenging however I crave the ritual of rising early to take time and create space that allows us to tap into the elevated consciousness.  Allowing us to connect to the divine, our ancestors and ancestor guides.  Even in the face of challenge I know the reward of commitment is greater than the struggle so with this i hope to inspire you all to join me in this up coming 40 days sadhana. 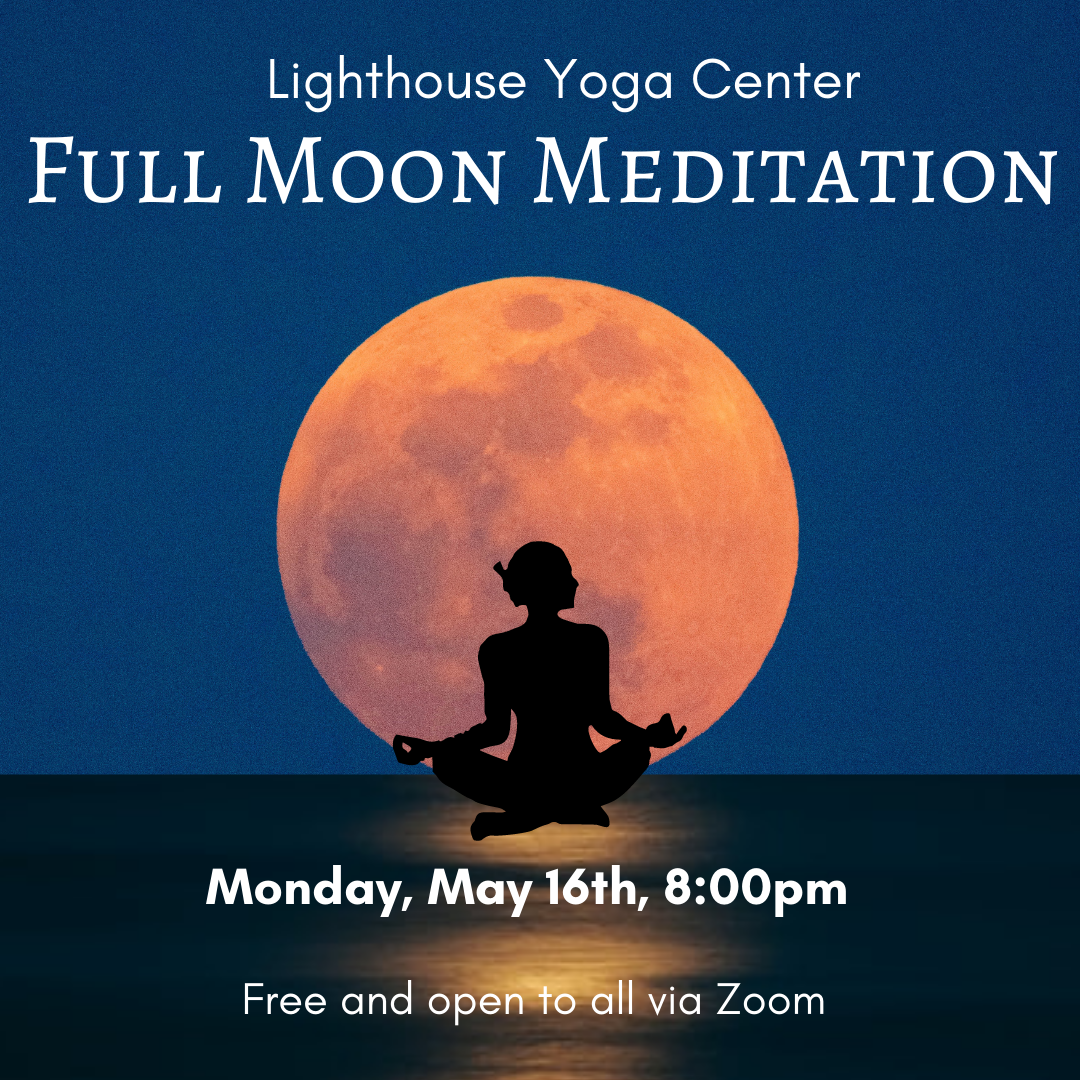 31-Minute Full Moon Meditation. Free and open to all!

Meditating under the power of the full moon amplifies the power of our meditation, allowing us to connect more deeply with the voice of our soul and tap into our inner peace. Join us for this monthly donation-based Kundalini meditation, to uplift your spirits and guide you through the coming cycle.

Open to all, no meditation experience is required. Donations are accepted. 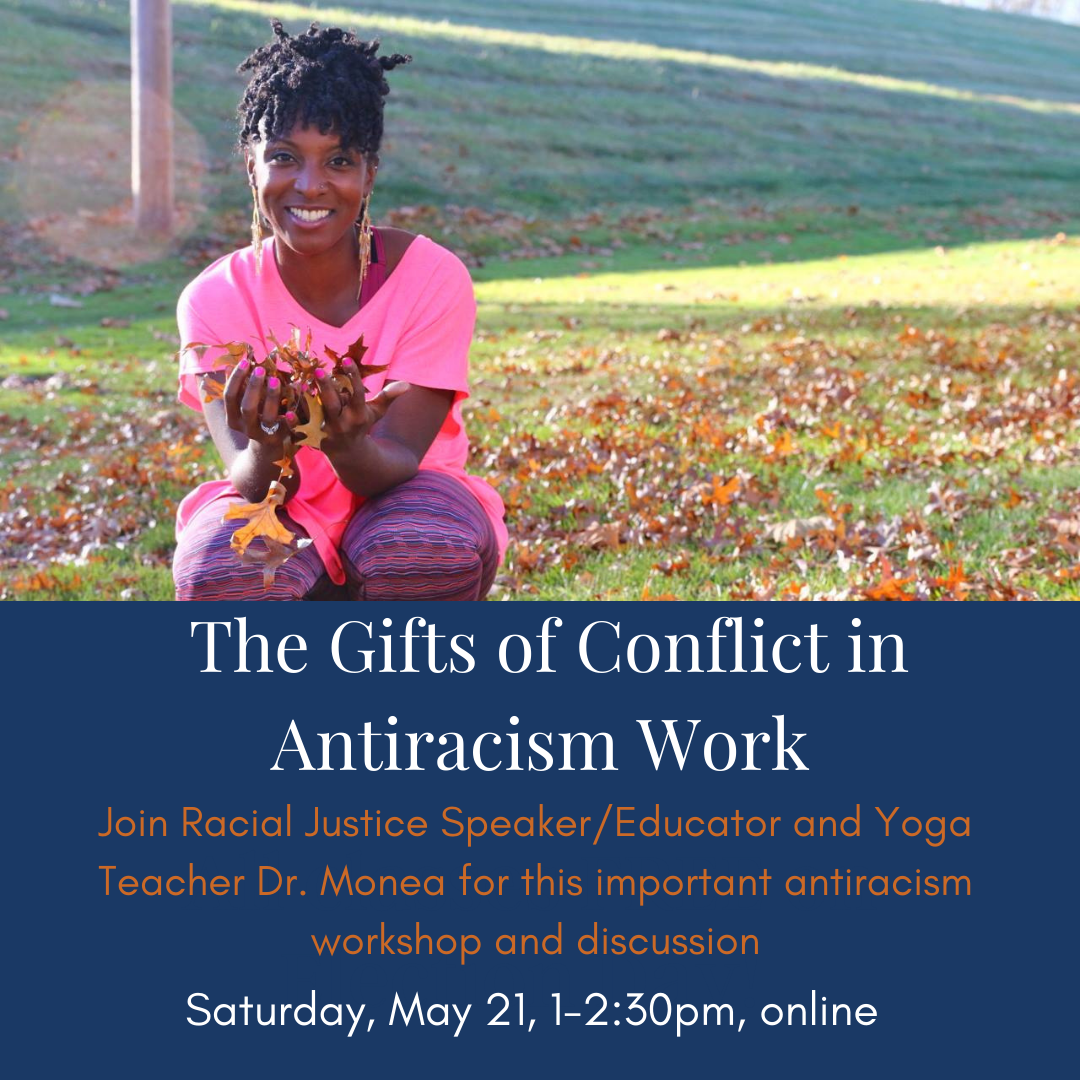 The Gifts of Conflict in Antiracism Work

“Healthy conflict is love tapping fear on the shoulder, saying, “It’s ok. I got this.”- Priya Parker

Join Racial Justice Speaker/Educator and Yoga Teacher, Dr. Monea, for this 1.5 hour workshop on the gift of conflict in antiracism work.

Conflict is inevitable in on-going antiracism work. We live in a world that is shaped by hundreds of years of collective, structural harms and these patterns have shaped us individually. When we avoid conflict or handle it carelessly, we risk repeating the systemic traumas that we work so hard to dismantle. Conflict can be uncomfortable, messy, and challenging but with the right tools conflict can be a real gift.

Come and be a part of this conversation. 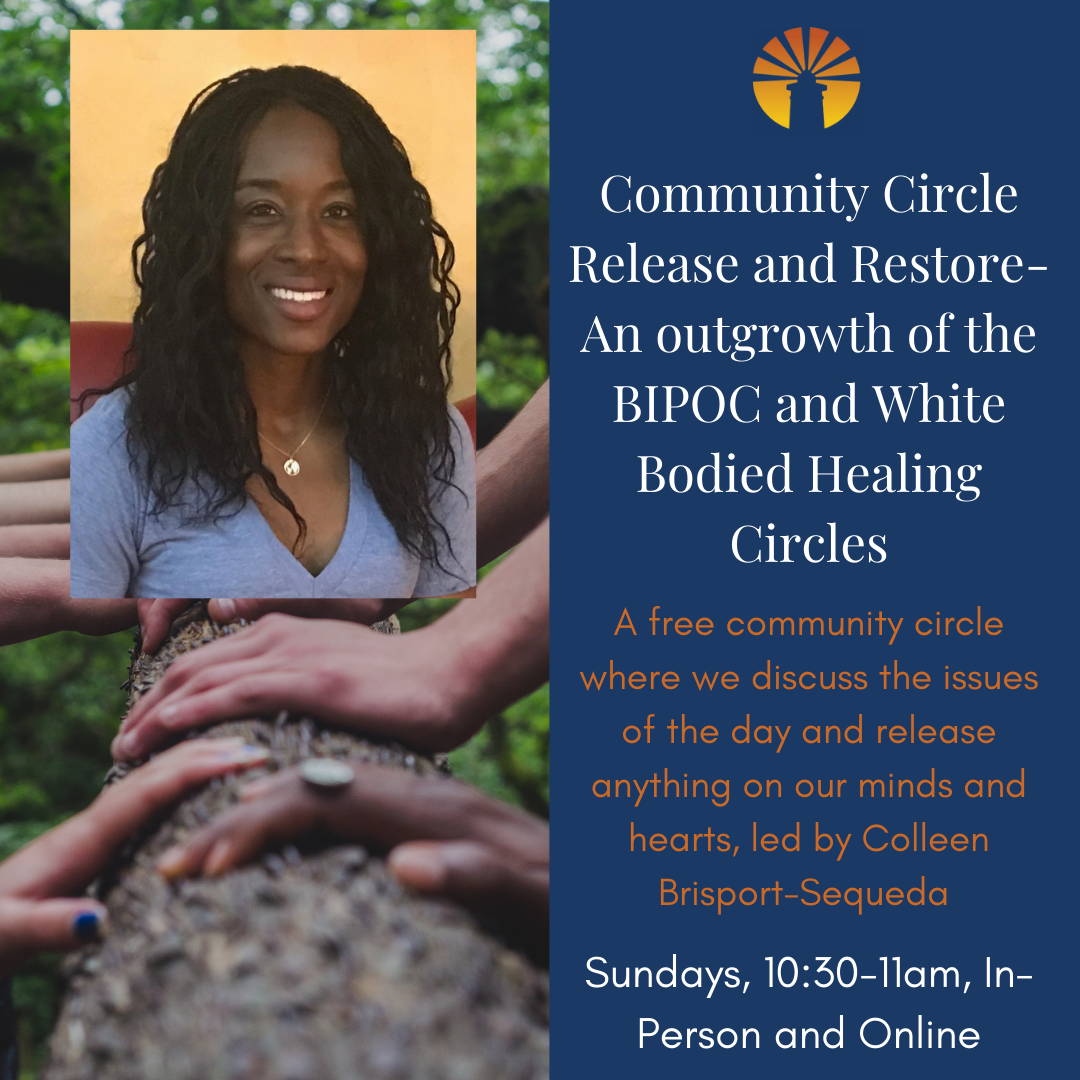 FREE! All are welcome, in-person or online (after Colleen's Sunday morning Flow), 10:30am

Community Circle Release and Restore - an outgrowth of the BIPOC and White Bodied Healing Circles.

We all share in this Lighthouse community - a community that shares an intention to nurture, rejuvenate and heal themselves and one another.  Join us weekly for this free community circle where we discuss the issues of the day and release anything on our minds and hearts. Each circle will end in a restorative 10 minute meditation lead by Colleen Brisport Sequeda who will also share tools and practices for daily well being. 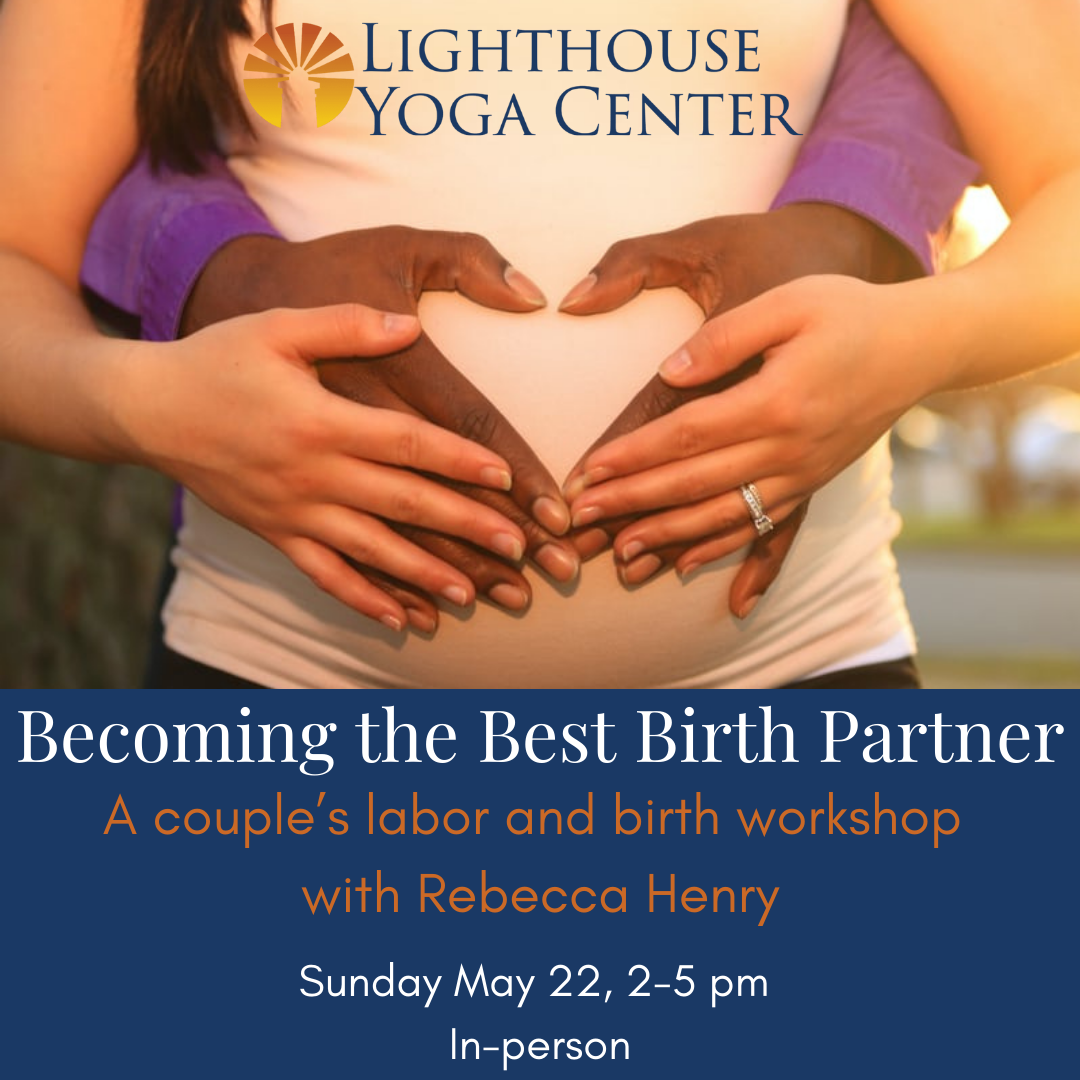 Online and in-person at Lighthouse studio

Working with both pregnant person and partner, Rebecca will show birth partners how to guide, and support the laboring person, both at home and in the hospital, so that they can find her inner strength to bring forth baby. Together you’ll learn the basics of what to expect during labor, along with partner-enhanced poses and other relaxation techniques that you can use throughout the remainder of pregnancy and labor. The goal is to to ease stress, anxiety and pain, and to promote relaxation and calm so that you can both work to bring baby into the world surrounded with love and joy! 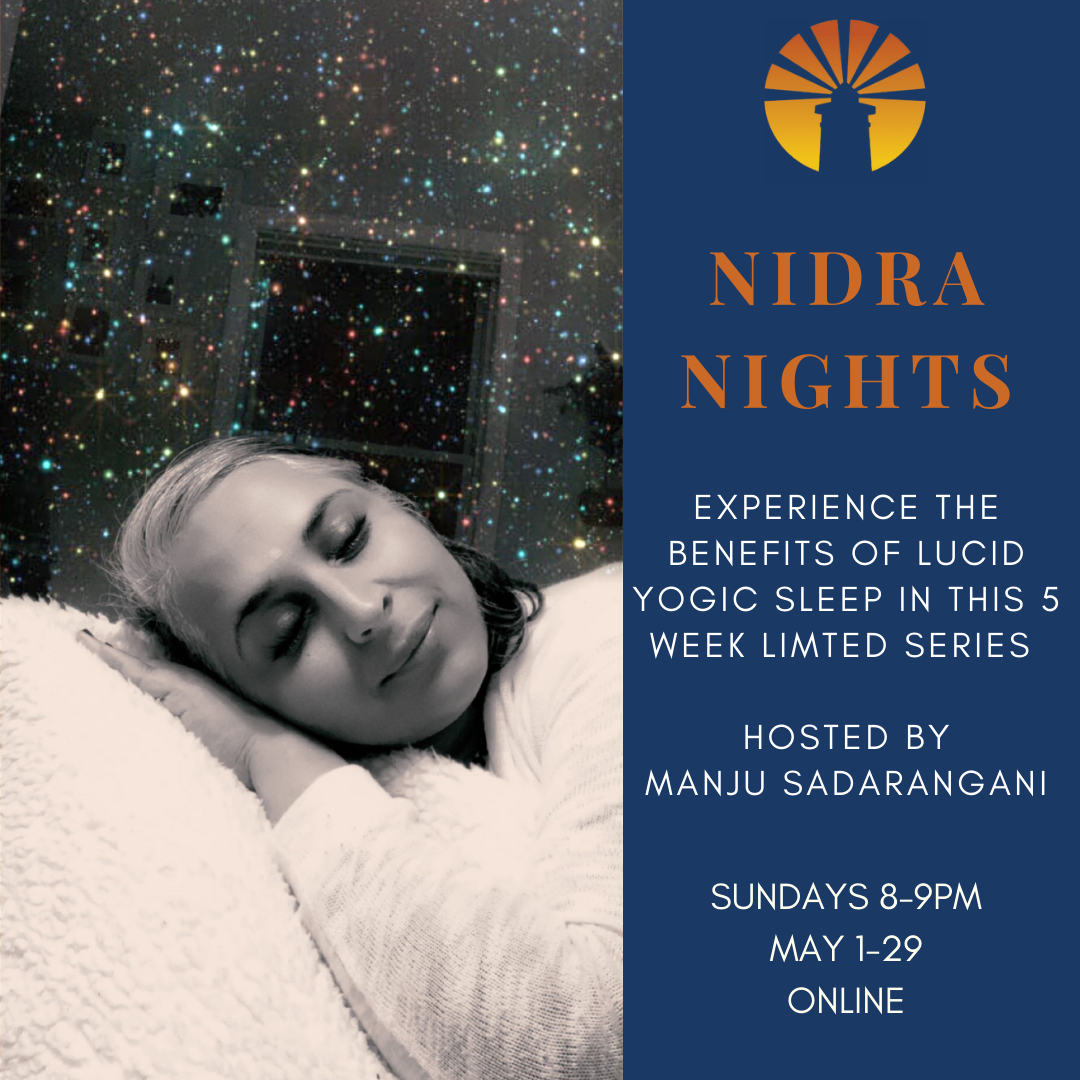 Manju is back with an extra special Sunday evening Nidra practice!

Join us for a five-week journey experiencing lucid yogic sleep, Yoga Nidra. Nidra is a guided meditation which takes you through the pancha maya kosha (five layers of self), leaving you with a sense of enoughness 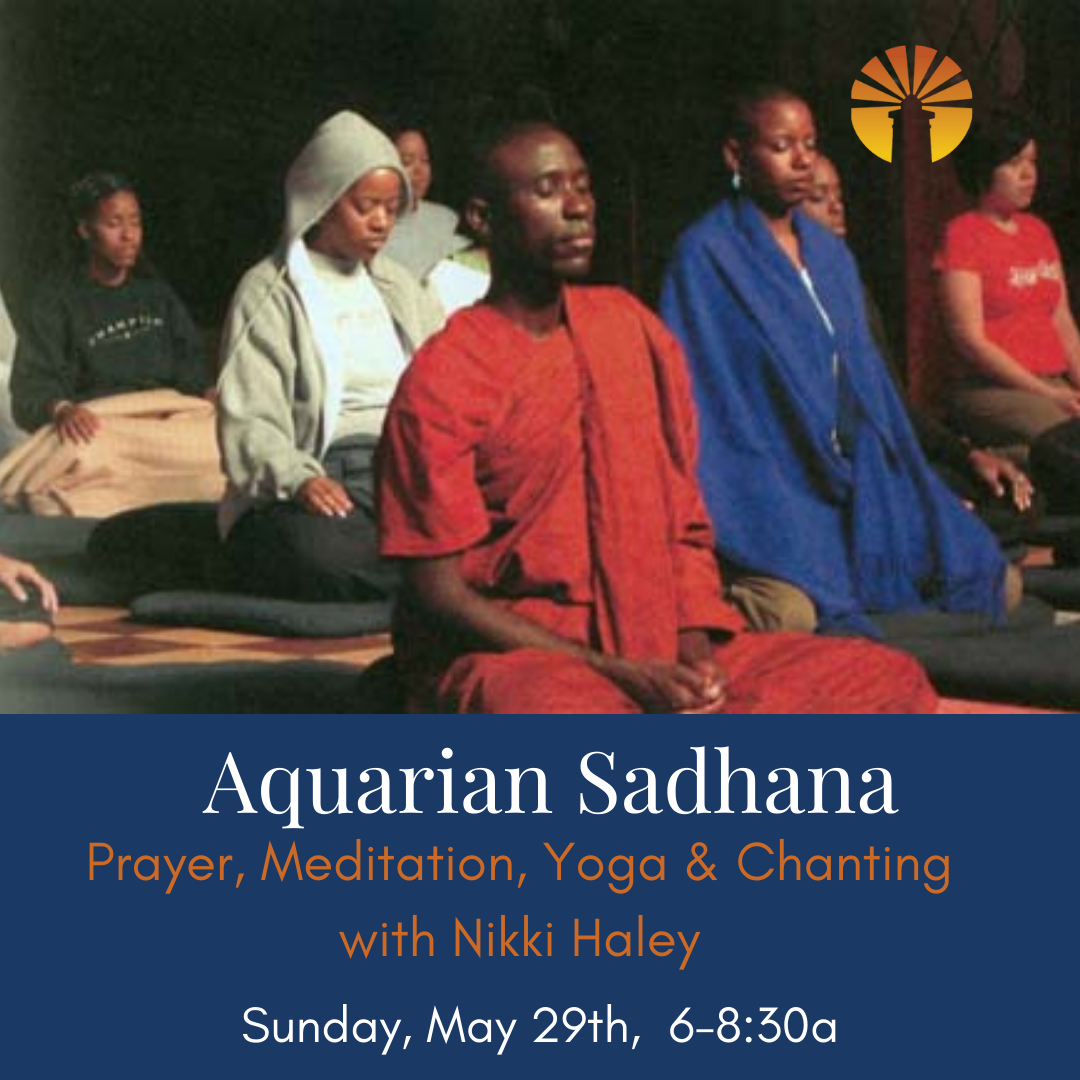 Free and open to all.

Aquarian Sadhana is a 2-1/2 hour yoga and meditation practice that includes an opening meditation or prayer, about 45 minutes of Kundalini Yoga, and then 62 minutes of beautiful chanting. We start during the hours of the "amrit vela" - the predawn time, where stillness abounds and we can tune into our universal connection with all beings. This practice is joyful, uplifting, and transformative.

This month, as a special offering, we will be replacing the traditional opening prayer, JapJi, with our 40-day Meditation for Beaming and Creating the Future. We start at 6 am, yoga will begin at approximately 6:35 am, and the Aquarian mantras will start at 7:15 am.

To learn the mantras, please click on the "learn more" button. 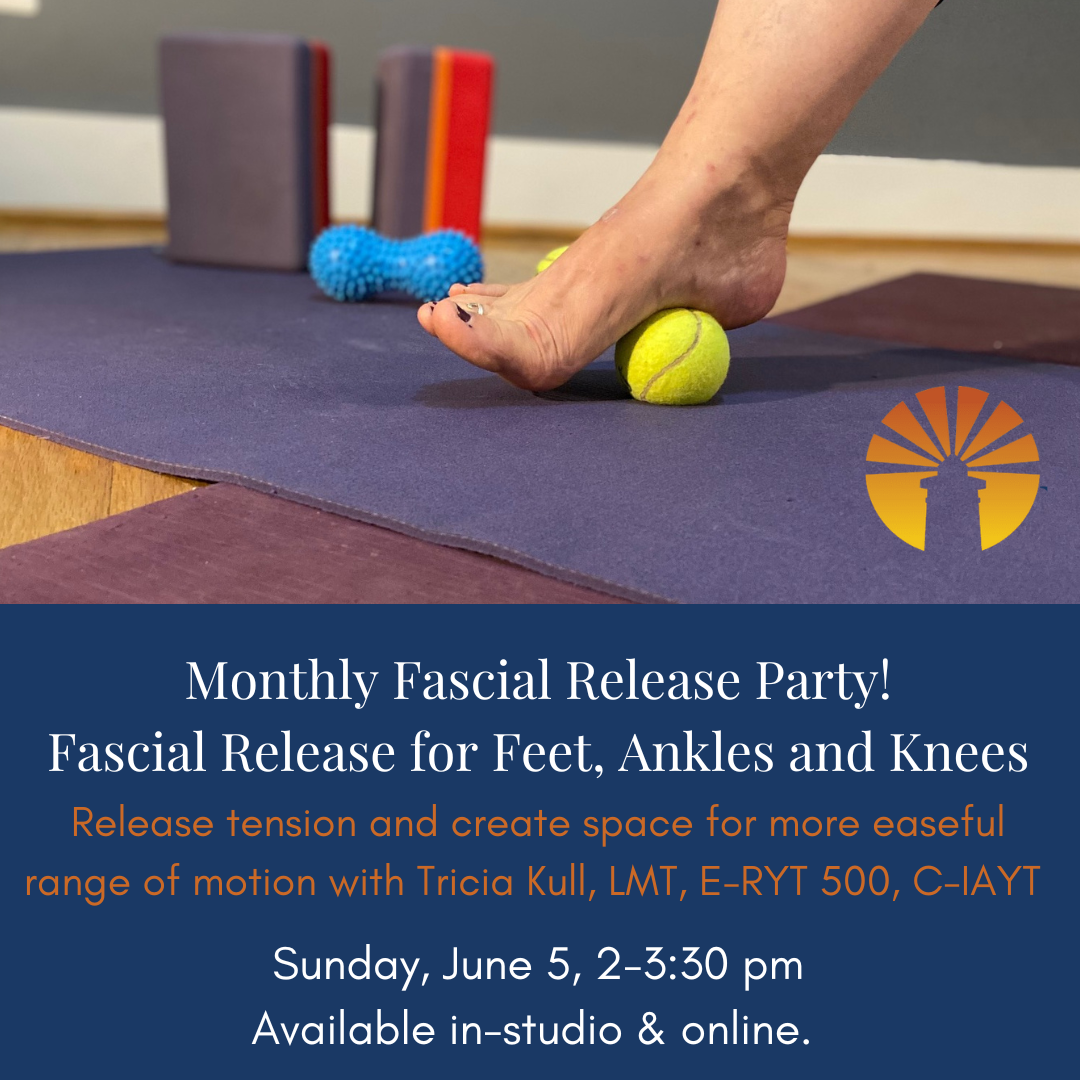 With Tricia Kull.  Offered in person or online

Fascia is connective tissue that surrounds your muscles, blood vessels, nerves, and organs. When it is healthy, fascia allows your muscles to slide and glide as you move, but when your fascia gets tight and stuck, it can restrict your movement and breath and even cause pain. In these workshops, we will use tools and simple techniques to release layers of fascia throughout the body giving special attention to a particular area each month. This practice will help to release tension, create space for more easeful movement, and improve body awareness. Everyone is welcome and no previous yoga experience needed to join. 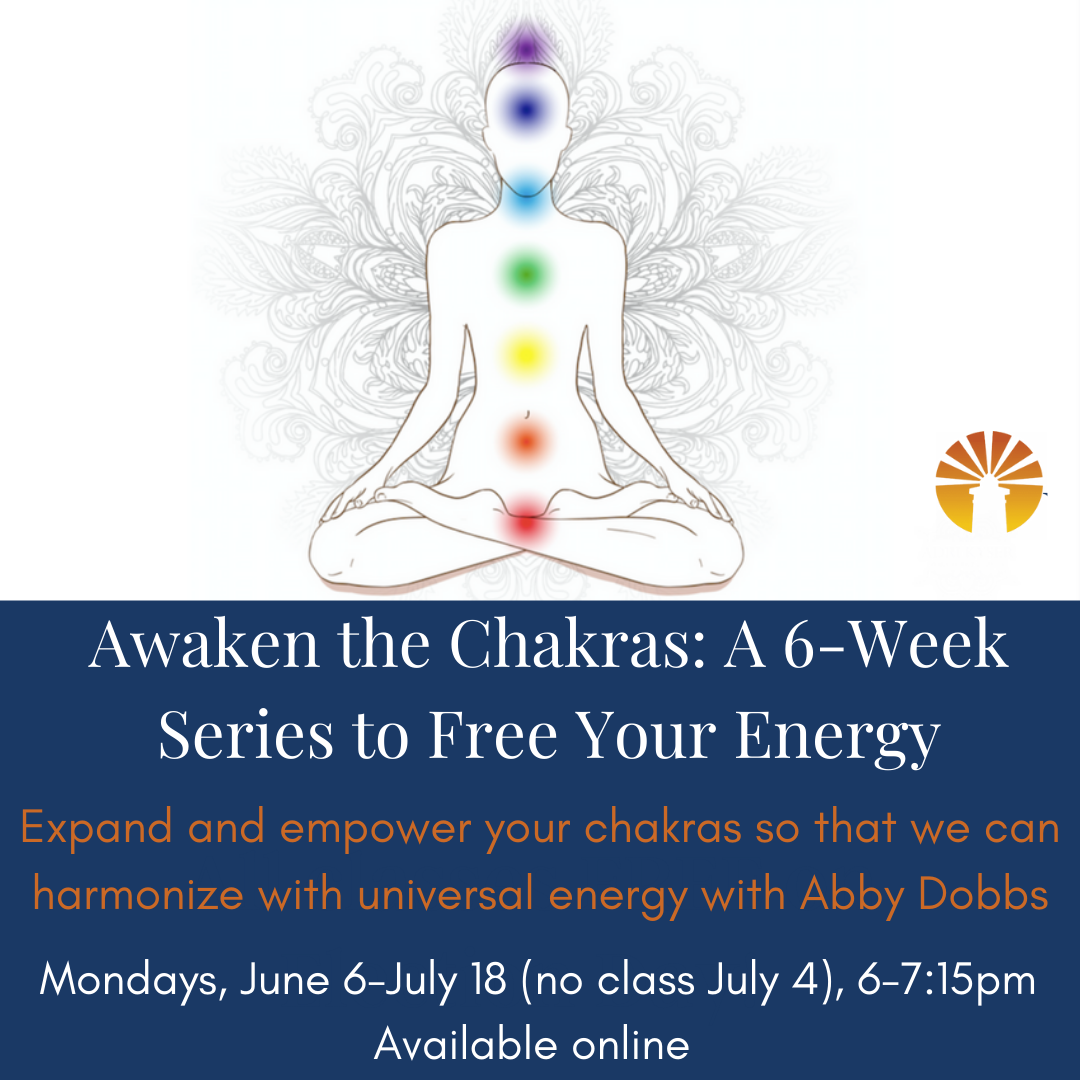 Awaken the Chakras: A 6-Week Series to Free Your Energy

Chakras are powerful energy centers through which we uptake and transmute Source energy into our physical, emotional, and spiritual bodies. When we experience stress, anxiety, or trauma, our physical and energetic bodies contract and cut off our ability to communicate with Source energy. In this special workshop series, we'll soften, expand, and empower our chakras so that we can harmonize with universal energy. Each session of this series will begin by learning about the chakras and their unique energetic and emotional tenors. Then, we'll weave together yoga asana, pranayama practices, and guided meditation to directly awaken each chakra, and help you discover which of your individual energy centers are strongest and which are blocked or constricted. Each part of this series is designed to build your skillfulness in feeling your chakras, and to deepen your visceral experience of prana moving within, through, and around your energy centers.

Join birth and postpartum doula Rebecca Henry for her unique 6-week hybrid Prenatal Yoga Series.  Join us either on-line or in person - must be vaccinated to attend in person.

Prenatal yoga is not just a regular yoga class adapted for pregnant people.  At a time when everything is changing in your body, prenatal yoga helps moms-to-be reconnect with and build body awareness, stretch,  strengthen and release the muscles most easily affected by pregnancy and foster a greater understanding of what is happening with our bodies during pregnancy and childbirth. 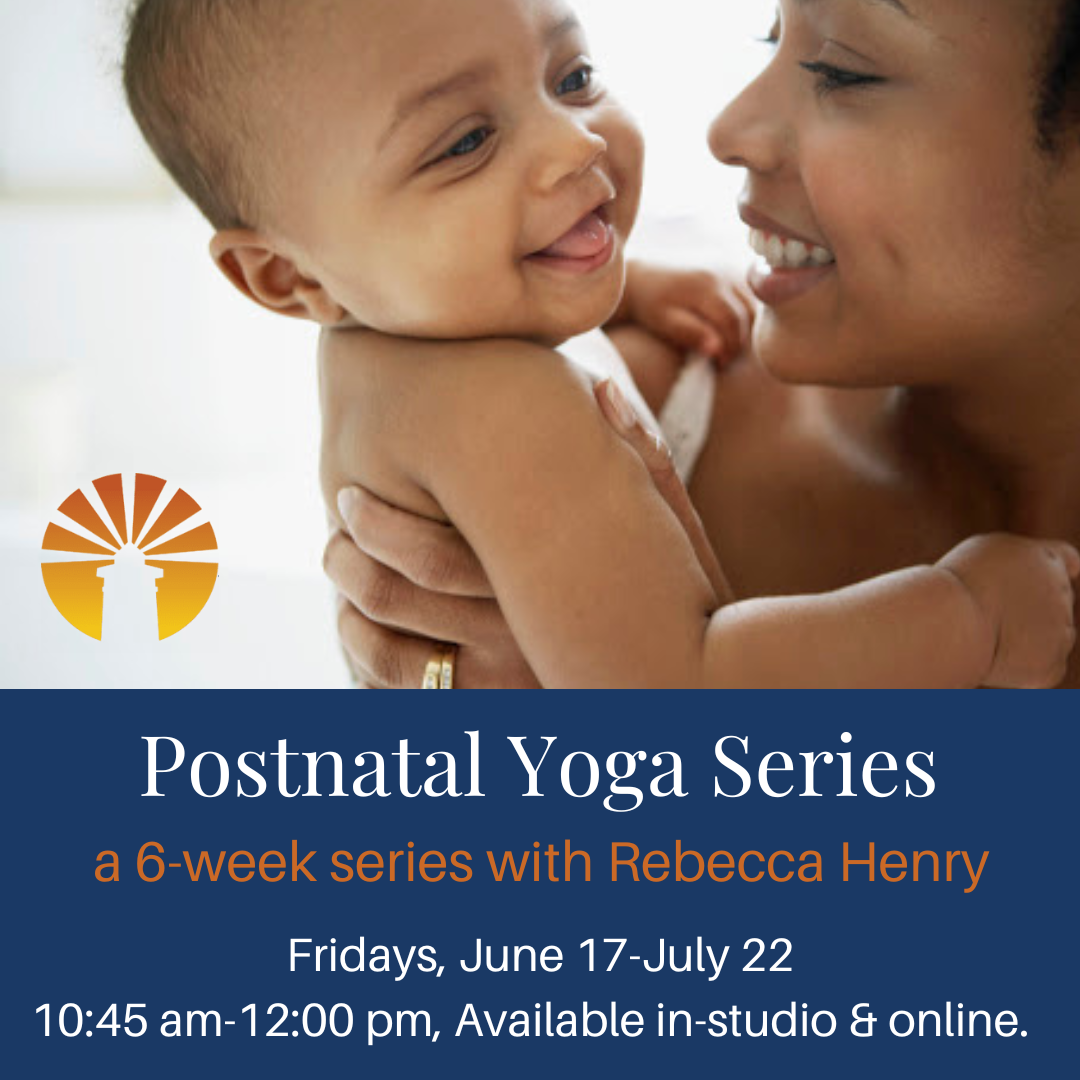 Available online or in person.  To attend in person you must be vaccinated.

This postnatal class series, designed for people with babies 6-weeks to pre-crawling, will focus on exploring and learning about how the core, pelvic floor and joints can all be affected by pregnancy and how we can work to heal, strengthen and stabilize.  Restorative poses throughout each class will help soothe baby-addled nerves. And with babies welcome in class (both online or in person), you can feel free to stop your practice anytime you need to care for baby. And you'll receive a recording of each class, so if you had to leave practice to care for baby, you can pick up where you left off on the recording later! Each class gives you a chance to connect with other new parents in the community and talk about any issues you are having with your post baby body. 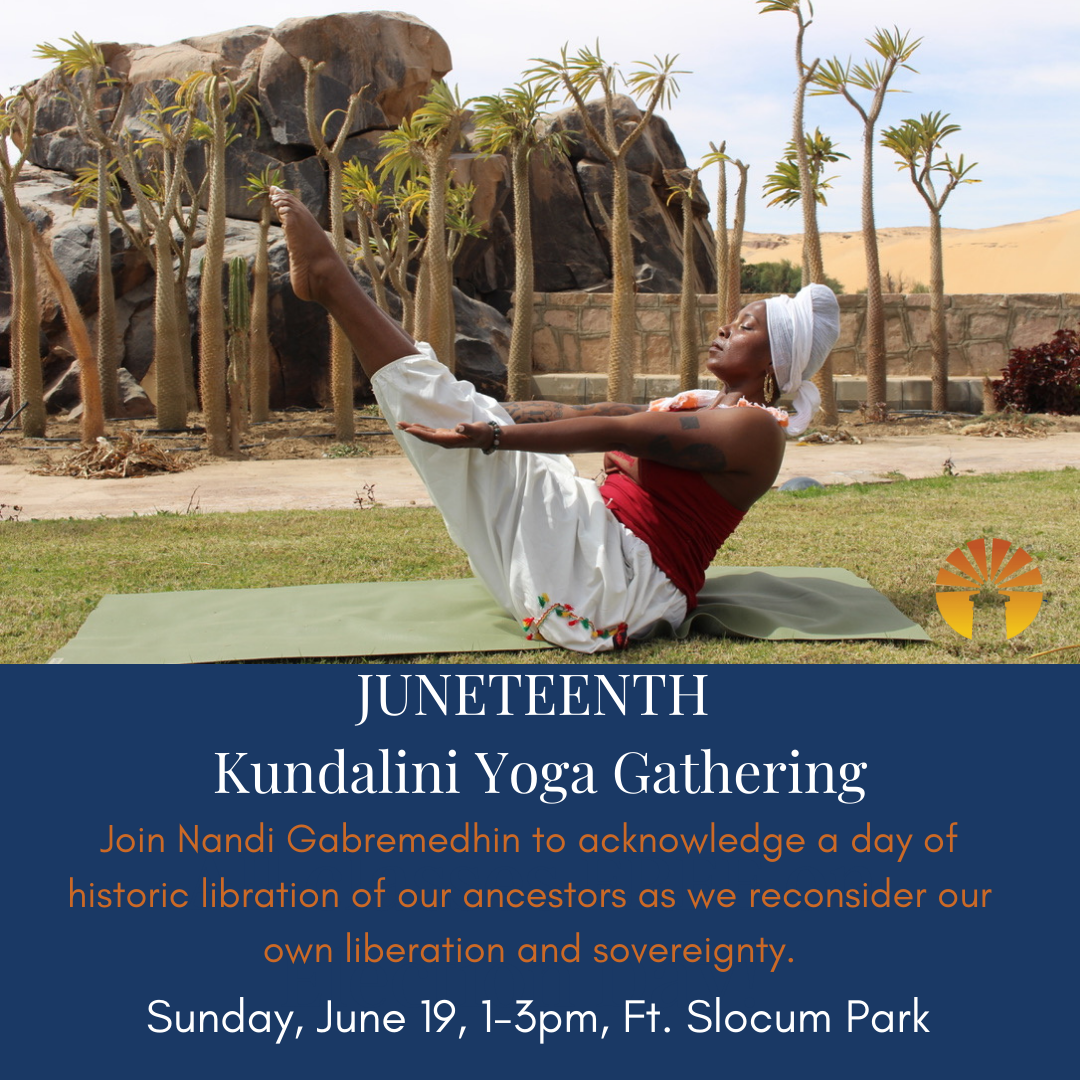 Juneteenth National Independence Day and also known as Jubilee Day; Emancipation Day, Freedom Day and Black Independence Day is a federal holiday in the United States commemorating the emancipation of enslaved African-Americans. It is also often observed for celebrating African-American culture. Originating Galveston; Texas, it has been celebrated annually on June 19 in various parts of the United States since 1865. The day was recognized as a federal holiday on June17, 2021, when President Joe Biden signed the Juneteenth National Independence Day Act into law. Juneteenth's commemoration is on the anniversary date of the June 19, 1865, announcement of General Order No.3  Union Army; Gordon Granger, proclaiming freedom for enslaved people in Texas which was the last state of the Confederacy with institutional slavery.

As we acknowledge this historic day of "freedom and liberation", let us also re-examine our own liberation of body, mind and spirit as African-Americans, Indigenous peoples, women, men, non-binary, parents, business owners, marginalized humans; wanting to live full expansive lives that explore indigenous/cultural spirituality, high education, adventure, pleasure, security, and vast options as sovereign beings. There are more ways to being locked up beyond chains of slavery or even prison walls. 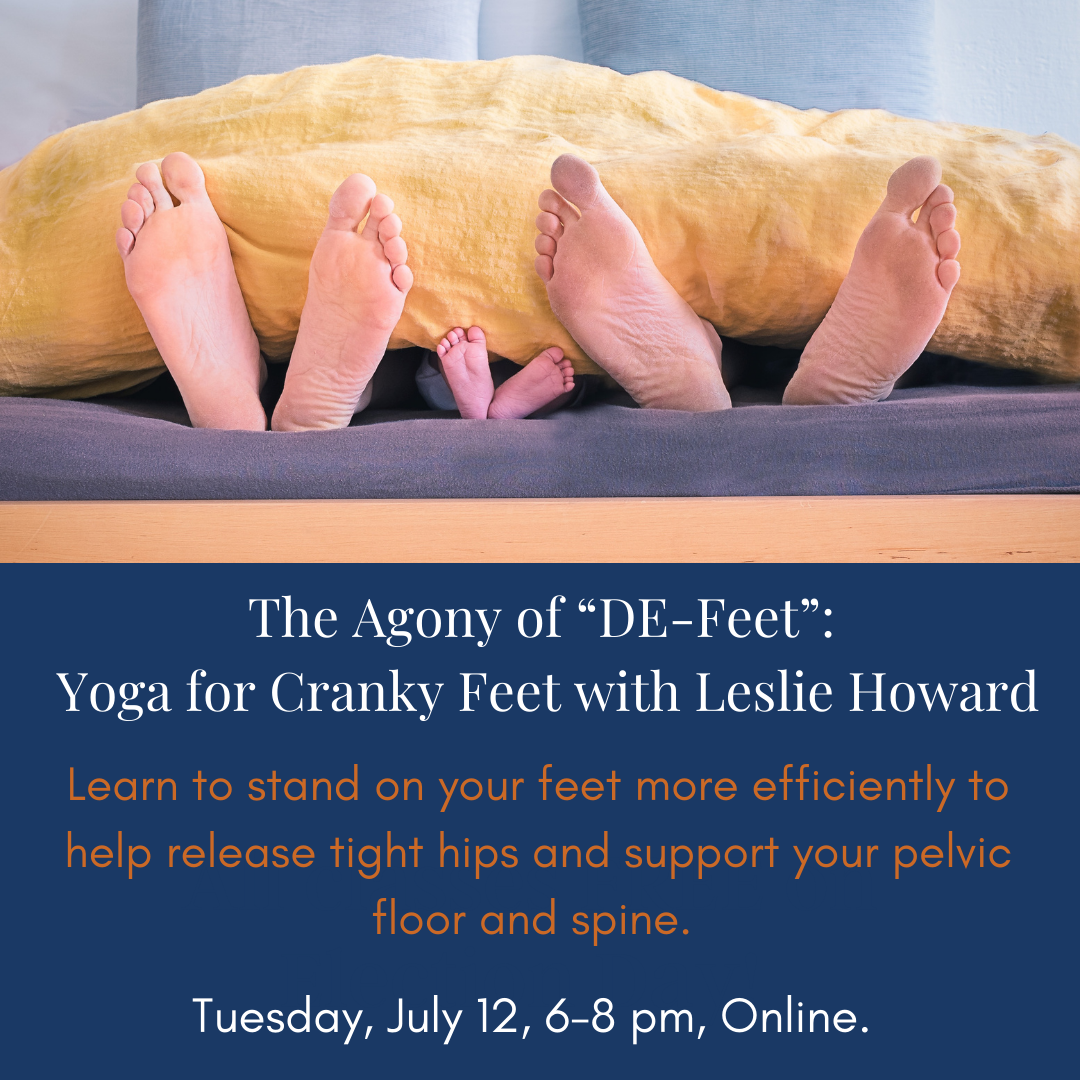 The Agony of "DE-Feet": Yoga for Cranky Feet

Leonardo da Vinci stated that “the human foot is a masterpiece of engineering and a work of art.” Yet each day we take this masterpiece and stuff it into a shoe and forget about them until there is a problem. Feet get tight, toes start to gravitate into claws and then we wonder why our hips are tight. Releasing the feet can make your legs and hips more fluid and learning to stand on your feet more efficiently helps to support the pelvic floor and spine. Join Leslie in this fun and informative workshop. You will leave with ways to strengthen and release the feet and have a new appreciation for these two masterpieces. 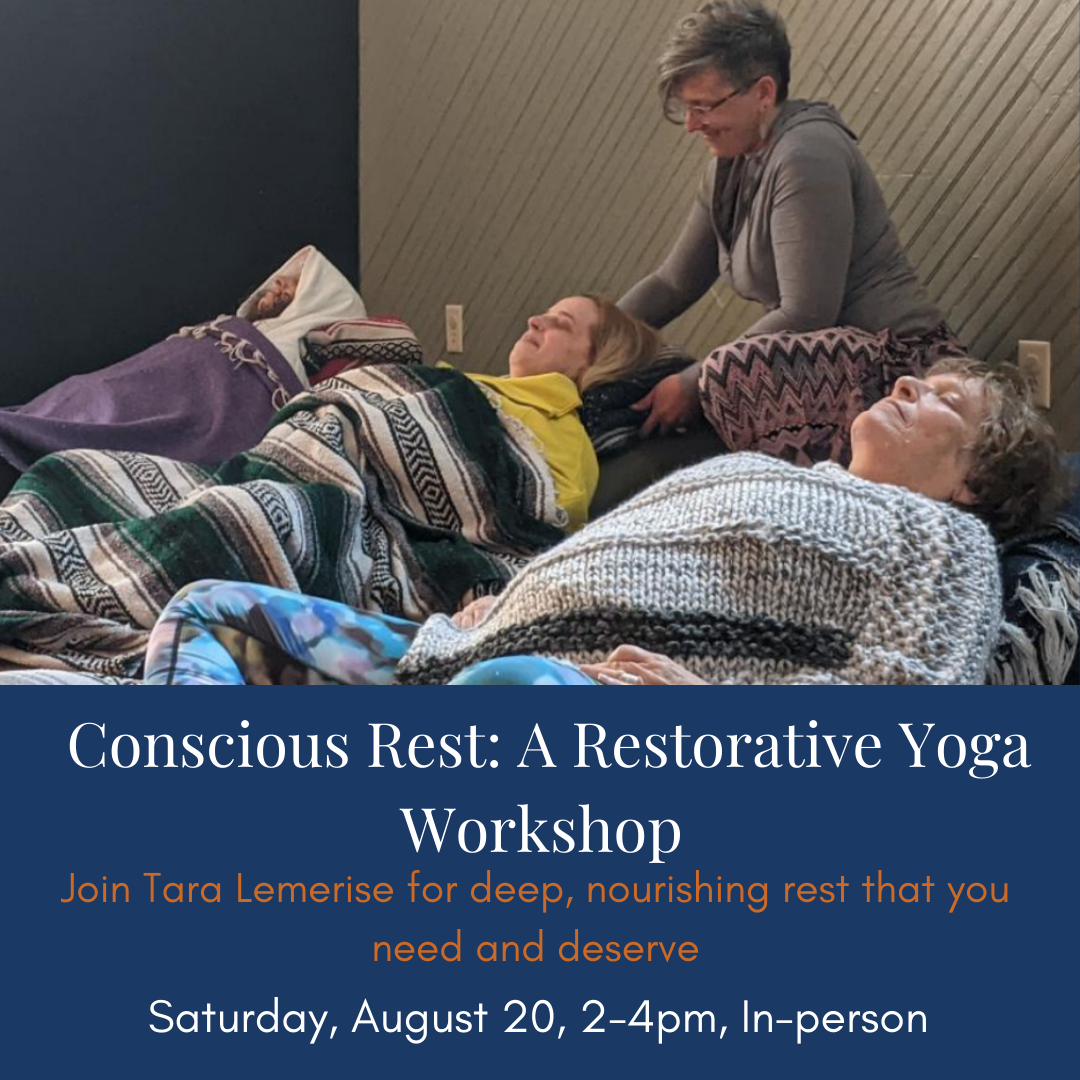 Do you find yourself "relaxing" without ever feeling truly refreshed? Restorative Yoga is more than just an excuse to pull down those comfy bolsters from the prop shelf for a yoga nap. This practice is about learning how to allow yourself to be fully supported so you can observe and learn your mind/body's process of unwinding. Come get the deep, nourishing rest you need and deserve. Everyone welcome. 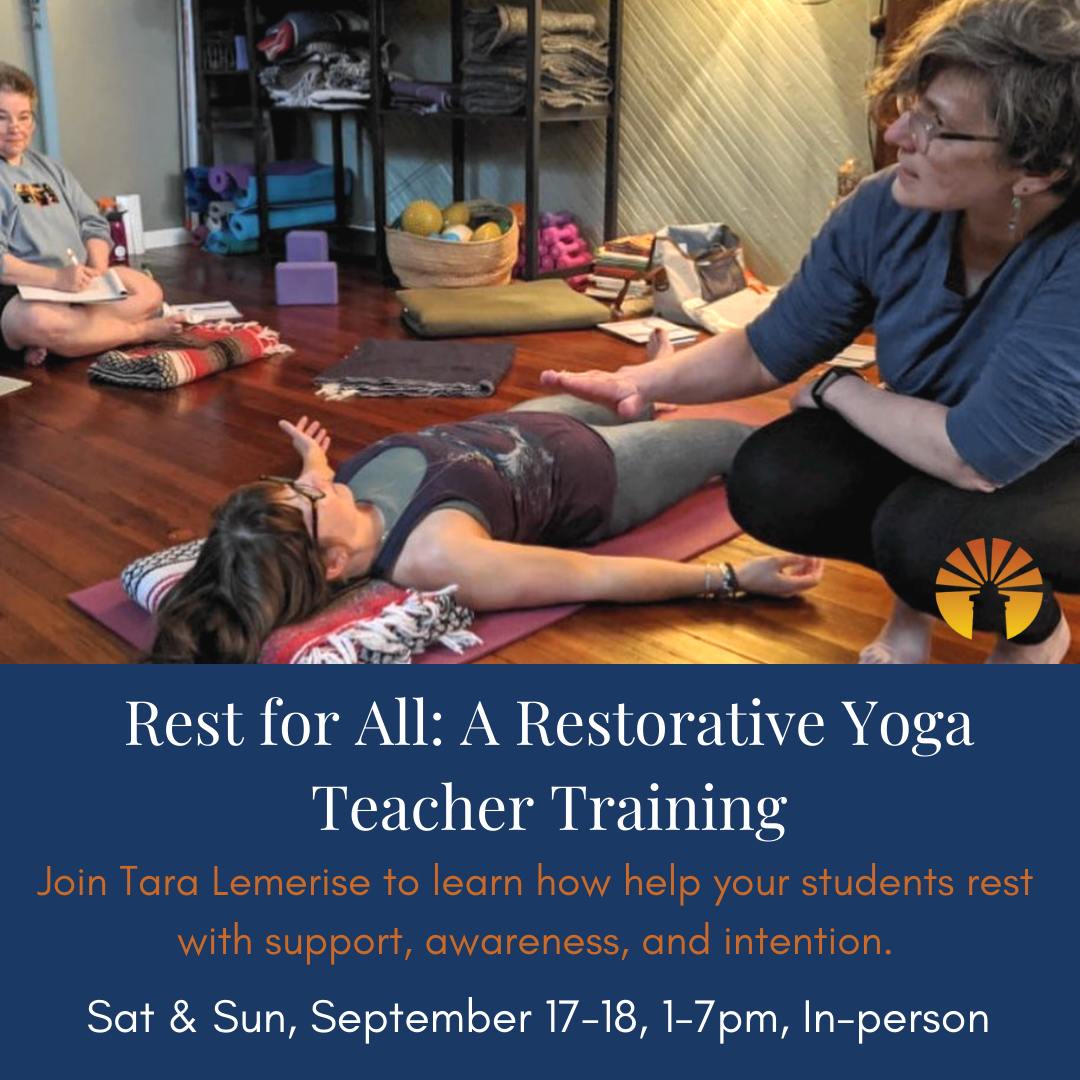 Rest For All: A Restorative Yoga Teacher Training

Some of our students’ deepest experiences of yoga happen when we can give them the opportunity to stop working to control their body and mind. Instead, we can help them rest with support, awareness, and intention.

This training is ideal for: new and experienced yoga teachers who want to grow teaching skills anyone currently enrolled in an immersion or yoga teaching training program anyone interested in deepening their understanding and experience of Restorative Yoga.

This training includes a spiral bound training manual and is eligible for 12 continuing education credits with Yoga Alliance.

1) I agree & understand that I am voluntarily participating in classes/events with Lighthouse Yoga Center, either on premises, virtually, or remotely. In any physical activity, risk of serious physical injury is possible. Yoga is no substitute for medical diagnosis and treatment. I am aware of the physical risks involved with strenuous exercise and understand that it is my personal responsibility to consult with my doctor regarding my participation. I attest that I have no medical condition which would prevent me from taking part in yoga classes or workshops, and I assume responsibility for any risk or injury I may sustain as a result of my participation.
I accept that the instructor, business, or hosting facility is not liable for any injury death or damages to person or property resulting from my participation in classes/events with Lighthouse Yoga Center or accessing facilities.
2) COVID-19 Risks. I acknowledge the contagious nature of COVID-19 and voluntarily assume the risk that I may be exposed to or infected by COVID-19 by attending classes and events conducted by Lighthouse Yoga Center, regardless of the location of the classes and events.
3) I acknowledge and agree that any photos taken on the Lighthouse premises or during Lighthouse activities may be used for marketing purposes, with or without identifying factors. To exclude myself from the use of my image, I agree to notify Lighthouse Yoga Center by email to this effect.
4) I have read and fully understand and agree to the above terms of this Liability Waiver Agreement. I am signing this agreement voluntarily and recognize that my signature serves as complete and unconditional release of all liability to the greatest extent allowed by law in the District of Columbia.